A popular attraction is the monument and white crosses which mark the graves of the travelers from Taos who were ambushed and killed by Apaches in 1830, and for which the city is purported to be named. White Sands Missile Range displays missiles and weapons at its visitor's center. Its museum traces the origins of space and nuclear research. Separate and distinct from the missile range is White Sands National Monument, an area of over 275 square miles of pure gypsum. Nature tours, including Lake Lucero, are given. Visitors can explore the world's largest pecan farms at Stahmann Farms, about 7 miles south of the city. History buffs of the Old West will enjoy San Albino Church in old Mesilla, one of the oldest missions in the region; the Fort Seldon State Monument on the site of the former cavalry fort; and the Historical Museum of Lawmen, located at the Dona Ana County Sheriff's Department, which displays law enforcement memorabilia. The only federally funded monument to the Bataan Death March heroes can be found in Veterans Park in Las Cruces along Roadrunner Parkway. It was dedicated in 2001 and sculpted by local artist Kelly Hester. 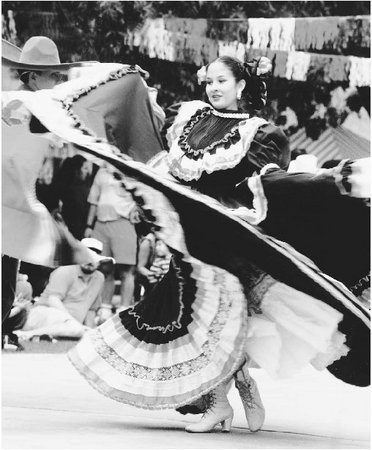 Las Cruces celebrates its Hispanic culture through events such as the Cinco de Mayo Festival and Folklorico de la Tierra del Encanto.
plays with the group once a year. The Las Cruces Community Theatre group produces five shows annually and holds a one-act festival of experimental plays in the winter. Opportunities for Creative Theater Students offers student performances at the NMSU Attic Theater.

Las Cruces boasts a number of interesting museums. Five are run by the city itself: the Las Cruces Historical Museum (formerly the Branigan Cultural Center), the Museum of Natural History, The Museum of Fine Art and Culture, The Railroad Museum, and the Bicentennial Log Cabin. The log cabin was originally in the Black Mountain range in Grant, New Mexico, until the mining industry ended and Grant became a ghost town. The log cabin was transported and completely rebuilt by Las Cruces Association of Home Builders, and features original furnishings and artifacts from the 1880s. The Las Cruces Historical Museum displays both historical and fine arts items in a turn-of-the-century parlor. The Museum of Fine Art and Culture was completed in spring of 1999. The Las Cruces Railroad and Transportation Museum holds artifacts from New Mexico's railroading past. The museum of Natural History displays plants and animals from the Chihuahuan Desert region and has programs running the gamut from dinosaurs to astronomy. The New Mexico Farm and Ranch Heritage Museum is the largest of its kind in the world and educates the public on everything in the 3,000-year history of agriculture in New Mexico. New Mexico State University has its own University Museum in Kent Hall on the main campus, which holds mostly anthropological artifacts including historic and prehistoric art objects. Space Murals, Inc. is a combination giant water tower mural and museum honoring space exploration and astronauts. Visitors to the Gadsden Museum get a taste of life and times of the Albert Jennings Fountain family, who played a crucial role in Las Cruces history. The museum exhibits Indian artifacts and objects from the Civil War, paintings and china, and outlines the history of the Gadsden Purchase.

Las Cruces hosts holidays and fiestas year round, many of them celebrating the city's Hispanic culture. Starting in mid-January is the Mesilla Valley Balloon Rally, when 90 or more colorful balloons fill the sky. April offers four happenings: the La Vina Blues and Jazz Thing features cool music sponsored by New Mexico's oldest winery; the Trinity Site Tour in White Sands Missile Range where the first atomic explosion was set off; the Border Book Festival, featuring renowned visiting authors, food, fun, and live acts; and the annual Frontier Days at Fort Seldon. Cinco de Mayo festivities take place in May, with Mexican food, dancing, and music in old Mesilla. Also in May, the Fiesta de San Ysidro celebrates agriculture and Hispanic traditions, and ends with a Blessing of the Fields and the hot GLASS Fly-In, showcasing the latest in flight technology. Another wine festival dubbed The Vintner's Splash is held at the end of May.

Fourth of July is celebrated with the Electric Light Parade and fireworks. In September and October, kids and grown ups alike enjoy the Mesilla Valley Maze, which includes hay rides to a pumpkin patch and finding one's way through twists and turns cut into a corn field. In early September is the Hatch Chile Festival, honoring the Mesilla Valley as the chile capital of the world with food, crafts, an auction, and more. An hour north of Las Cruces, Hillsboro holds its apple festival the first week of September. Diez y Seis de Septiembre commemorates Mexican Independence day with folk dances, mariachi music, and traditional Mexican foods. The world's largest enchilada is constructed each year at the Whole Enchilada Fiesta, with an accompanying parade and other festivities. The end of September and the beginning of October bring the Southern New Mexico State Fair, with food, music, an auction, livestock shows, and a rodeo. La Vina, New Mexico's oldest winery, holds its namesake festival in October. The Annual Mesilla Jazz Happening holds court in two places, the old Historic Plaza and the new Mercado Plaza, with horse drawn shuttles giving free rides between the two plazas. Then in mid October "Cowboy Days" unfolds, with roping and riding demonstrations, food and music, and cowboy poetry.

While the Anglo world celebrates Halloween, in Las Cruces there is Dia de los Muertos, or Day of the Dead, with candlelit processions, homemade altars in the streets, and a giant piÃ±ata. November brings the Annual Renaissance Craftfaire where artisans present their works in a juried art show and exhibition. In mid-November the International Mariachi Conference and Concert arrives to New Mexico State University and Young Park. Finally, in December, Christmas Carols and Luminarias set historic old Mesilla aglow.

Sports for the Spectator

New Mexico State University offers Division I NCAA college sports with 6 men's and 10 women's teams. Many games are held at Aggie Memorial Football Stadium with a capacity of more than 30,000 people.

Sports for the Participant

Las Cruces is home to more than 60 parks, many of which have playgrounds, picnic tables, and special events throughout the year. The city's four recreation centers have weight rooms and racquetball and basketball courts. Therapeutic recreation is offered at Mesilla Park Recreation Center. Summer programs include swimming, tennis, track and field, and computer camp. Other city recreation department offerings are soccer, football, softball, basketball, BMX, track and field, swimming lessons, volleyball, and boxing.

Shopping in Las Cruces can be a delightfully varied experience. Mesilla Valley Mall houses 74 stores, including both national chain stores and small boutiques. Rated one of the top 10 open-air markets in the country, the Las Cruces Farmers & Crafts Market presents more than 200 local artisans and farmers twice a week, year round. Visitors to Las Cruces are drawn to Old Mesilla, a picturesque village of galleries, unique stores and restaurants built around the town plaza, with buildings dating back to the 1850s. Mesilla is only five minutes from downtown Las Cruces. Visitors to Rancho Mesilla may sample a variety of chile pepper products while kids of all ages are entertained by llamas that roam the property. Also in Mesilla, Lowry Farms offers fresh or frozen berries, pecans, corn, flowers and ornamentals, and jams and jellies made on site.

Besides the wonderful Southwestern cuisine featuring dishes of local peppers and other produce, Las Cruces has more than 70 restaurants running the gamut from fast food and deli fare to Chinese, Japanese, continental, Italian, and, of course, Mexican fare.